De Bethune Celebrates the 10th Anniversary of the DB28

De Bethune celebrates the DB28’s 10th anniversary by introducing a set of three watches in 2020. All three timepieces, all true to the DNA of the DB28, are interpretations of the same theme, independent of each other yet linked by their history, the work that went into them, the brand cues they reflect. Each one a creation in its own right, yet all share a kinship, like siblings. 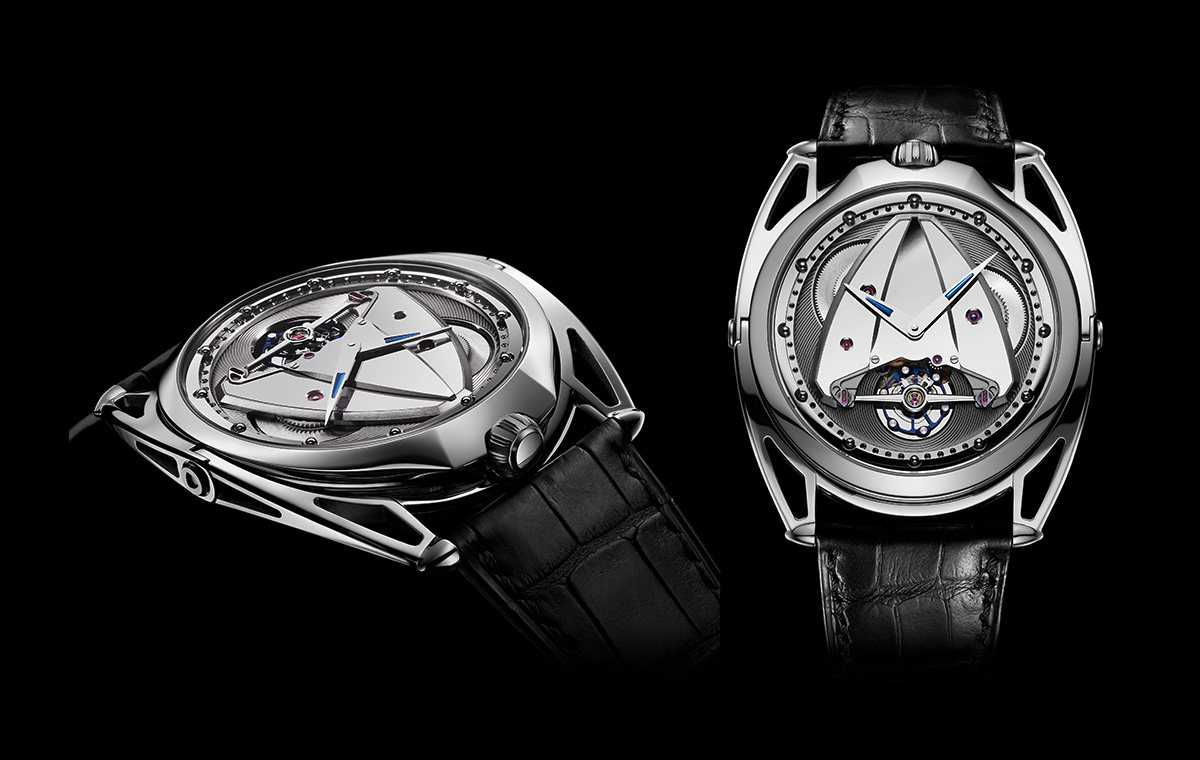 DB28XP brings the dream that much closer to reality, and today Denis Flageollet sees his years of research culminating in a magnificent timepiece that combines everything he has always hoped to express horologically.

The case band has been completely redesigned, with a more pronounced curvature, flowing with the lines of the wrist and lugs – whose bullets incidentally have also entirely redesigned. The plate’s Microlight finish is echoed along the sides of the case band, rendered all the more meticulously in the absence of simple geometric forms.

The dial is entirely made of Microlight, which shakes off the dust of the conventional and offers a modern take on traditional guilloche technique.

For telling time, no contrasting indexes, but little spheres polished like small satellites. They orbit a larger body, planet Earth, in the spirit of the solar system. A tone-on-tone pattern surrounds the central part of the elliptical dial, subtly revealing the movement’s wheels.

The blued titanium inserts in the hands at the centre are the discreet De Bethune signature.

The delta-shaped main plate – a De Bethune hallmark – is finished to perfectly reflect ambient light. The metal surface is patiently polished until it becomes a true mirror, a process that takes up to three hours.
Here, polished bridges and satin-finished bevels not only heighten the visual experience, but allow for a completely new interpretation.

The hand-wound movement features De Bethune’s balance wheel, visible through the dial thanks to an opening at 6 o’clock. Made of titanium, it is equipped with small white gold weights placed on the outside to give remarkable qualities of inertia, reliability and regulating ability.

The calibre’s plate is the exclusive triple shock absorption system designed to protect the whole assembly. Not only was De Bethune the first to design a bridge held on both sides, symmetrically, to ensure the balance is kept perfectly in position. The Maison also added two shock absorbers at each end to supplement the shock absorber of the pendulum itself. Hence the name “triple pare-chute” or triple shock absorber, which effectively absorbs and dampens violent shocks with springs instead of screws mounted on perfectly polished axes.

The DB28XP is regarded as a timepiece that sublimates the cues of the DB28, a true watershed born from the meeting of the Maison’s know-how with a resolutely futuristic vision for an ultra-thin watch. 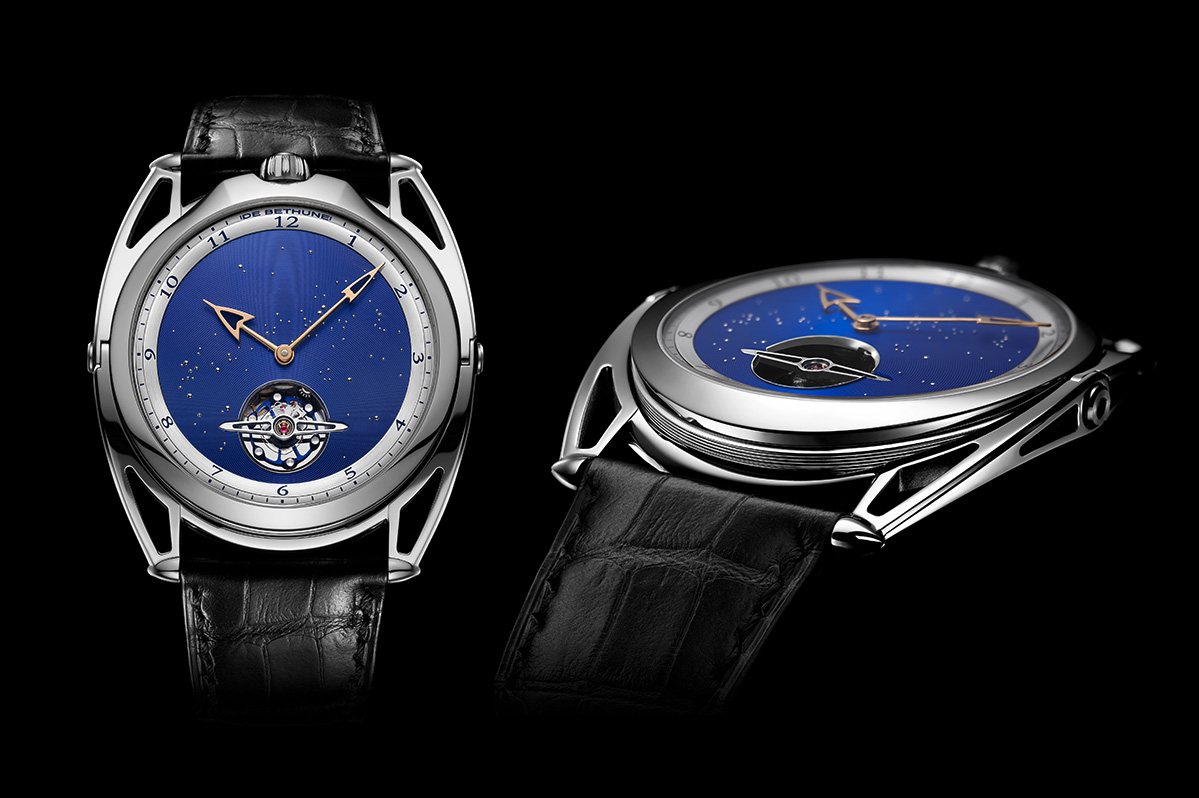 Classic by inspiration with its round, ultra-thin shape, its crown at 12 o’clock and a hunter case back borrowed from pocket watches, the DB28 Starry Sky comes in an ultra-lightweight, mirror-polished titanium. Its redesigned floating lugs only emphasise the modern, even futuristic character. Like an obsession, as a quest to represent the most beautiful sky, to capture its emotional power, and preserve it accurately so it can be worn on the wrist: DB28 XP Starry Sky offers a gaze into the infinite that has become a recurring theme throughout the Maison’s creations.

As a way of marking the DB28’s 10th anniversary, and inspired by DB28 Skybridge, which featured a curved sky, De Bethune raises the stakes of complexity even further by creating a blue Microlight firmament
DB28XP Starry Sky features the hour circle in silver, the minutes in Arabic numerals, the discreet De Bethune signature at 12 o’clock, and rose gold hands designed especially for this edition. 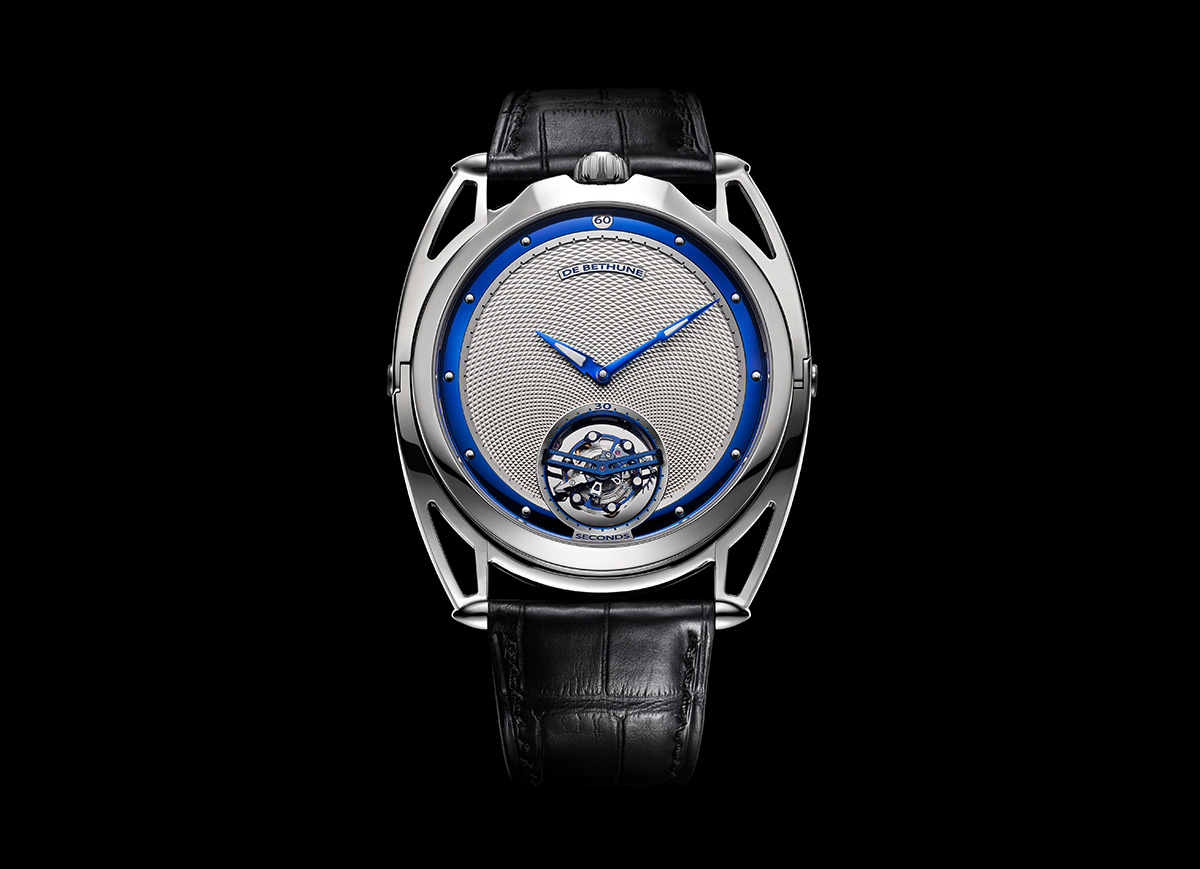 With this third interpretation of the DB28 theme, De Bethune rethinks the watchmaking architecture at its core and explores new codes. DB28XP Tourbillon is directly inspired by the famous dial of the DB28 Digitale.

The tourbillon positioned at 6 o’clock is a titanium creation that beats at a frequency of 36,000 vibrations per hour. It features an extraordinarily lightweight cage that rotates on itself every thirty seconds and comprises 63 components. A microscale exoskeleton keeps these features all together.

On the case back, as a nod to the Aiguille d’Or – the highest distinction of the Grand Prix d’Horlogerie de Genève – awarded to the first DB28: The position of the planets is that in the evening sky over Geneva when the prestigious prize was presented on November 19th, 2011.