A lifelong dream is being realized at last ! Vianney Halter, the space and time travel watchmaker, is happy to introduce you to the new technical breakthrough at the heart of his emblematic 3 axis tourbillon : the Deep Space Resonance. Vianney reengineered the tourbillon cage in order to integrate two acoustically synchronized balance wheels. A technical challenge and unheard mechanical prowess.

This creation is a tribute to undulatory physics, galaxy-shaking events and our Universe’s very fundamental mechanisms. After multiple years in research and development, creative phases and external influences, Vianney shows a unique system that accurately depicts a true physical phenomenon.

The idea of creating an acoustically resonant double-balance time instrument emerged in Vianney’s mind in 1996 when he started learning to play the piano.

When attuning the keys where three harmonic strings overlap, he noticed an energy exchange between the strings that forced them to resonate. Just like on the tuning fork, the resonance mechanism seemed to depend on the fixed base through which the energy flows. Vianney felt there could be a similar way to synchronize two balance wheels.

As he was doing some research on the subject, Vianney found early 1800s blueprints of Abraham Louis Breguet’s attempts to achieve resonance. The schematics showed devices allowing for the fine-tuning of the distance that separated the two balance wheels, which were in this case using a fundamentally different coupling than the piano or tuning fork. Breguet’s works were based on the interactions between the balance wheel rims and the air between them, using the air as a fluid gearing. In this case, the size of the gap, air viscosity and rotation directions were critical. Air behaved as a clutch and only one rotation was allowed. Without air, there could be no resonance.

On the other hand in order for the acoustic resonance phenomenon to occur, waves are of utmost importance. Using a linkage of some sorts, waves could be transmitted from one balance to the other. By having both spirals attached to a well designed common bridge, the two oscillators could influence each other and attain resonance, whichever direction the balances were turning.

In order to form solid bases for the mechanical groundworks, Vianney needed to study the preexisting resonance watches, then craft an instrument that could demonstrate the possibility of resonance from coupling two oscillators. He then started collecting every chronometric object linked to undulatory phenomena he could, aiming to build such a demonstrator.

The final construction will be a tribute to all the scientists and craftsmen who developed theories, and imagined and built machines to share them.

The workshop changes into a laboratory

In 2007, Vianney Halter starts the construction of the demonstrator he has been imagining since 2005. To build his movement, he uses two identical Russian deck watches that give him identical gear trains. For the two balances to resonate, he needs the two oscillators to be as similar as possible, and links them using a solid bridge, like in a tuning fork. 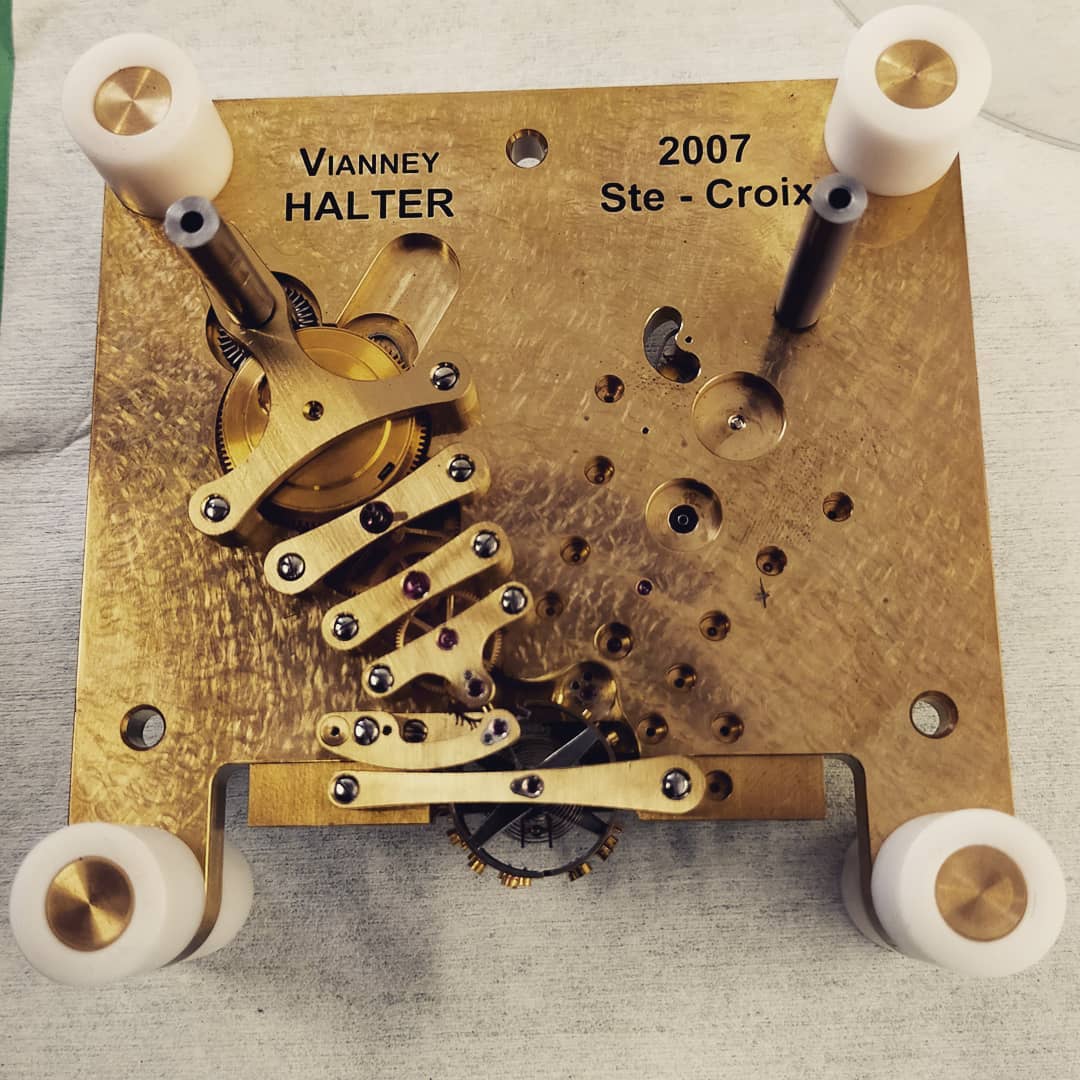 As day to day watchmaking and manufacture began to consume Vianney’s time more and more he had to set his experimental works aside. However as time passes, the urge to return to it grows stronger. In 2012, Vianney buys an antique clock from watchmaker Langlois, crafted in 1660. With the help of horological expert Jean-Claude Sabrier, he discovers the clock is in fact one that Christiaan Huygens subcontracted to various craftsmen to demonstrate his novel isochronism theory. Beyond confirming his theory, the scientist and father of modern horology witnessed the resonance of multiple pendulums when installed on a single frame. For Vianney, this experiment was the initiator of the horological acoustic resonance idea.

In 2016, a major scientific breakthrough pushes Vianney forward with the resonance. Almost a century after Albert Einstein’s relativity theory, gravitational waves were detected, confirming the existence of two collapsing black holes and sending ripples through the scientific community and Sci-Fi buffs alike.

Space-Time is the fabric of our Universe. Heavy objects bend it and deform it and when they accelerate or collide, those objects generate waves that propagate through the cosmos at light speed, in all directions. Those waves perturbate the whole Universe, and finally were measured on Earth using a resonance-based space-time seismograph.

This discovery was so important to Vianney he was determined to finish the research about acoustic horological resonance. By trying multiple configurations for the coupling of the two balances, he eventually finds one that allows acoustic resonance without relying on aerodynamics.

At the same time, a new idea and a new challenge emerged. In 2011 Vianney dreamt of an object designed to remind us of our four dimensions during our stellar travels: the Deep Space Tourbillon. In 2013 the watch was born – a 3 axis central tourbillon to show you the physical dimensions, surrounded by the display of our 4th dimension, time.

With these 4 dimensions making the elastic fabric of our universe, being warped and reshaped by gravitational waves, it appeared evident that the resonating oscillators will be placed at the center of the Deep Space Tourbillon.

The study of the demonstrator’s configurations allowed to define the tuning fork configuration in which will be the two balances. To prevent the wave dissipation, Vianney chooses specific, solid materials, and minimizes the length and complexity of the path the wave must travel. This led to the configuration in which the two spirals are mounted opposite in front of each other. Using a rigid shared bridge for the two spirals, Vianney made sure that the resulting resonance was a genuine behavior, not a functional artifact.

Work and perseverance eventually bore fruit, and at the beginning of 2019 the two balances in the demonstrator were beating as one. The behavior was stable and allowed Vianney to start the construction of a wrist-worn model: the Deep Space Resonance.

Each development is made of steps, and one could see the original Deep Space Tourbillon as a step, a host to be transcended by the resonance.

Those four dimensions are the basis of our human condition but are not an absolute. The resonance found its way in the Deep Space to show us that the fabric of the Universe is, in fact, the canvas on which things interfere, interact, and resonate. 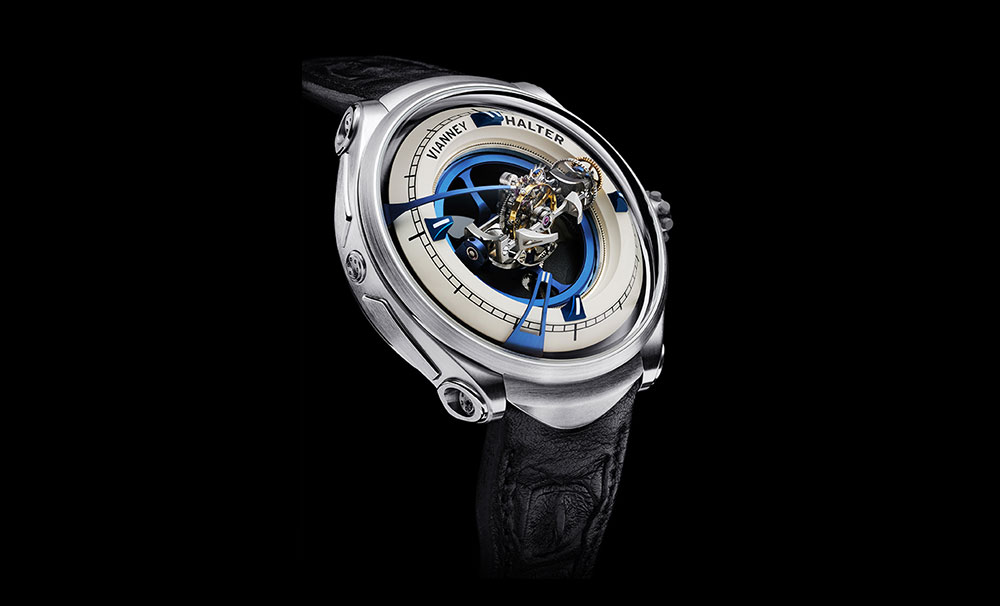 The Deep Space Resonance Prototype immense works took over the entirety of 2020. Vianney built it to check that the acoustic synchronization correctly functions when worn on the wrist.

Thanks to the three axis rotation, every detail on the structure is visible. The complexity of the mechanism is highlighted by a unique and light architectural construction. The 42 polished curved pillars that hold the bridges are a testimony to Achille Benoît’s beautiful 1939 marine chronometer. Every part of the mechanism is traditionally decorated and refined by hand for a breathtaking effect. Despite the apparent complexity, the technological architecture was kept at the most simple and efficient. Nothing is superfluous.

The axis structure is layered in concentric cages: The innermost cage holds the balances and weighs 0.6 grams for 162 parts. This cage rotates inside the traverse in 60 seconds. The traverse weighs 2.8 grams and rotates around it’s horizontal axis in 6 minutes. The traverse is mounted in the cradle, that rotates on it’s vertical axis in 30 minutes. The whole 3 axis system counts 371 individual parts. 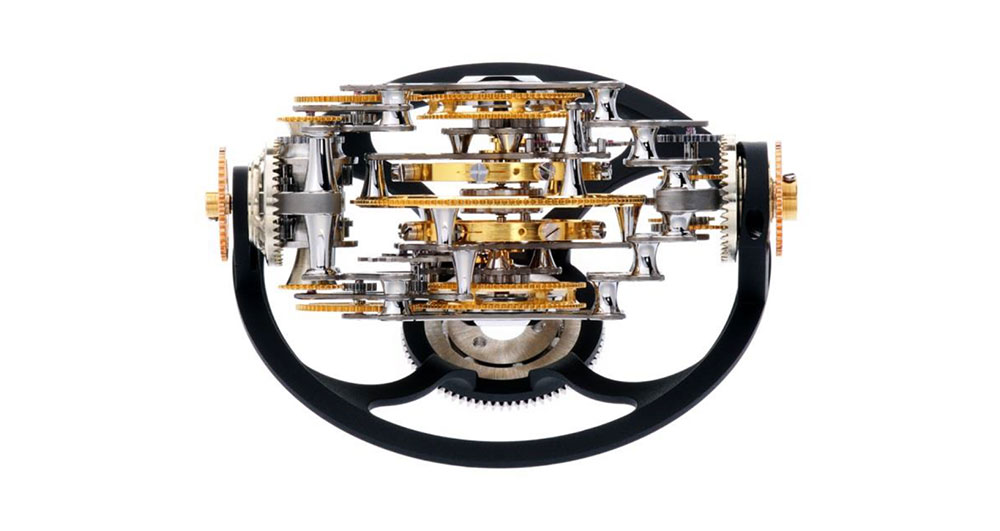 The balances are nominally 21‘600 vph but in reality they vary a little. Each balance will transmit its motion to the shared bridge which will in turn affect the other balance. This way, both balances will influence each other, and quickly and reliably reach a common frequency. In turn, this makes the whole regulating system more accurate.

The mode depends on the position the balances were occupying when they started beating, and will keep this mode until the end of the power reserve. The next time the watch is wound, the balances may start beating in a different mode, and will offer a new view to the resonance phenomenon.

The dial was developed as a nononsense tool, and directly inspired by the Vernier calliper. The Hours and Quarters can be read in the top aperture. At the bottom aperture one can read the supplemental minutes by finding where the marks match the best.

For the final realizations of this technical device, the reading of the time will be easier thanks to a fascinating dial specifically designed to match the resonance principles. The power reserve will be drastically enhanced.

In the meantime, please enjoy this first wrist worn acoustic resonance. The beauty of the mirror construction, architectural symmetry, light reflections and finishing contrasts give an magical sense to the mechanical ballet. As in mirages, you will be entranced by the shimmering of wheels and pillars. There will be no up, no down, left or right. You will be lost in the resonance as in the middle of the cosmos.

Watchmaking is the way Vianney expresses himself and shares. With this construction he wanted to resonate with everyone surrounding him and share his fascination for science and mechanics. As a watchmaker, he claims no absolute scientific certainty, and rather offers a beautiful step upon which future generations will build.

“When I imagine and build demonstrators like this one, I learn a lot from it. Each mechanical challenge helps me understand our Universe more and more. Every time, I marvel like a child facing it’s complexity and subtlety. What I like the most is understanding, crafting, testing, and in the end sharing. Sharing is the ultimate goal of my work as a watchmaker.” 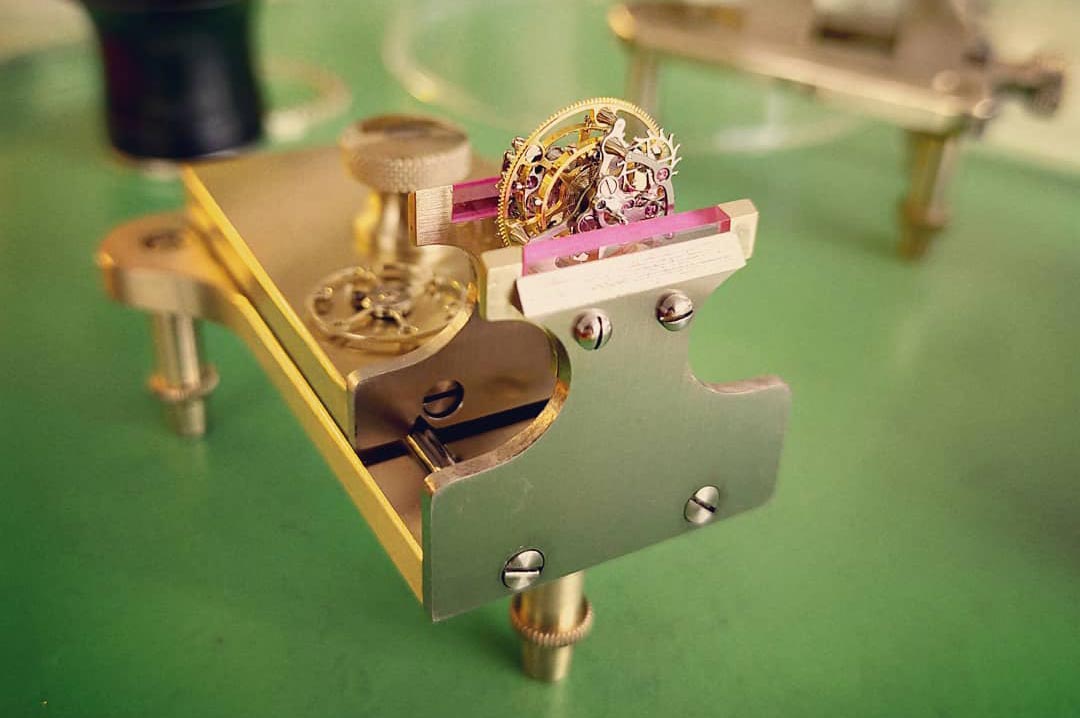