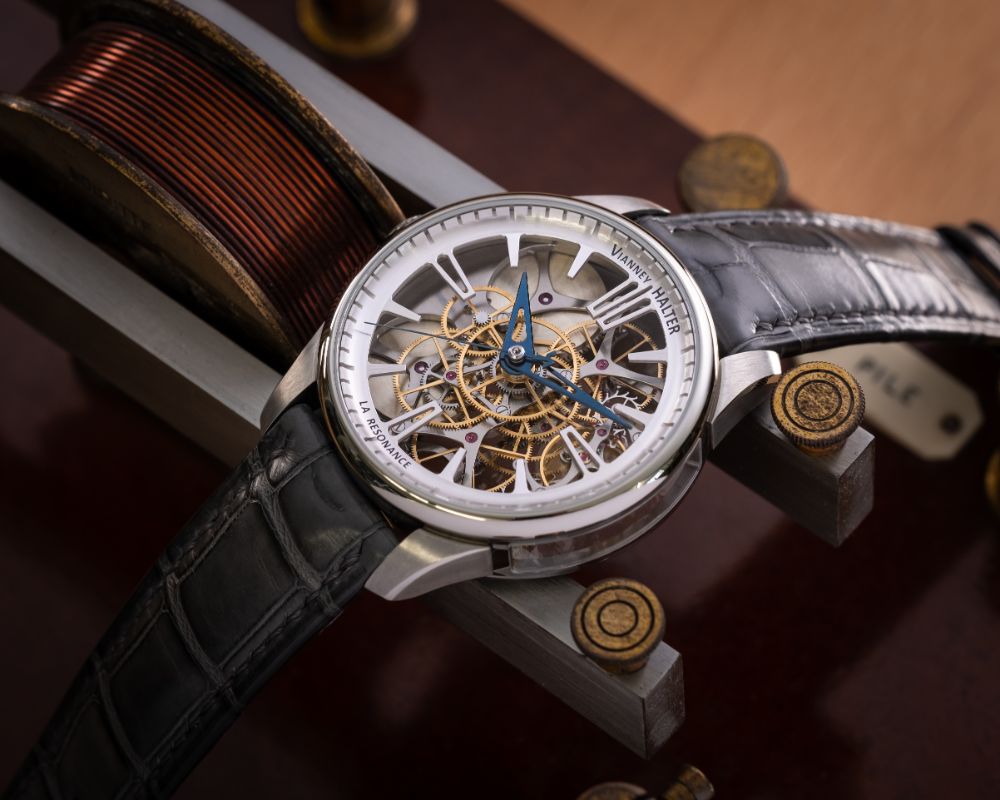 The acoustic resonance between two spiral-balance oscillators is a genuine complication. It took Vianney Halter several years of research and development to arrive in this form. In 2013, the Deep Space Tourbillon was born as an instrument, displaying the human interpretation of the 4 dimentions, thus allowing us to navigate across the universe sharing our perspective from Earth.

In 2021, this instrument was brought back transformed into The Deep Space Resonance. It’s encounter with spinning black holes, quasars and supernovae modified it’s core, and it’s purpose. In space, there is no up nor down, no left, right, front or back. Things gravitate, oscillate, attract and repulse in the isotropic void. From these condensed notions was born: La Resonance.

Two black holes orbiting fast enough emit gravitational waves that propagate through space. The source of the waves inspired Vianney to create a new watch in which the resonance point of origin is used as a seed for the construction of the whole device.

This new construction is a 3 hand, 35 grams light, round watch, regulated by two oscillators coupled by acoustic resonance. The manual winding gives it a power reserve of 100 hours. It sounds simple, however…

Encapsulating this notion of isotropy required a brand new developement. The watchmaker launched the creation of a unique caliber in a minimalistic case. In order to balance everything, all the elements of the watch were invented conjointly.

The construction of the case was a challenge as well as a return to the bases: apparent simplicity sprinkled with Vianney Halter DNA. The case itself is like a picture frame and display for the mechanics. The aim is to showcase the horological technology without stifling the delicate character of the movement, and therefore is kept round, slim, with no superfluous material. The result is a 39 mm unibody titanium ring, enclosed with 3 curved sapphire windows. Despite being one simple block, the case is sculpted so that it pays with light.

The lugs, thanks to a small shoulder and bevel, are slightly set apart from the body. Being separate elements, the lugs have their own technical finish: brushed and beveled. They are removable to allow for a complete restauration and overhaul without altering any geometry.

The knurled crown at 9h allows the 3h side to be fitted with a sapphire window to permit the view on the heart of the acoustic resonance. The lateral window reminds one of the allimportant command bridge in spaceships. 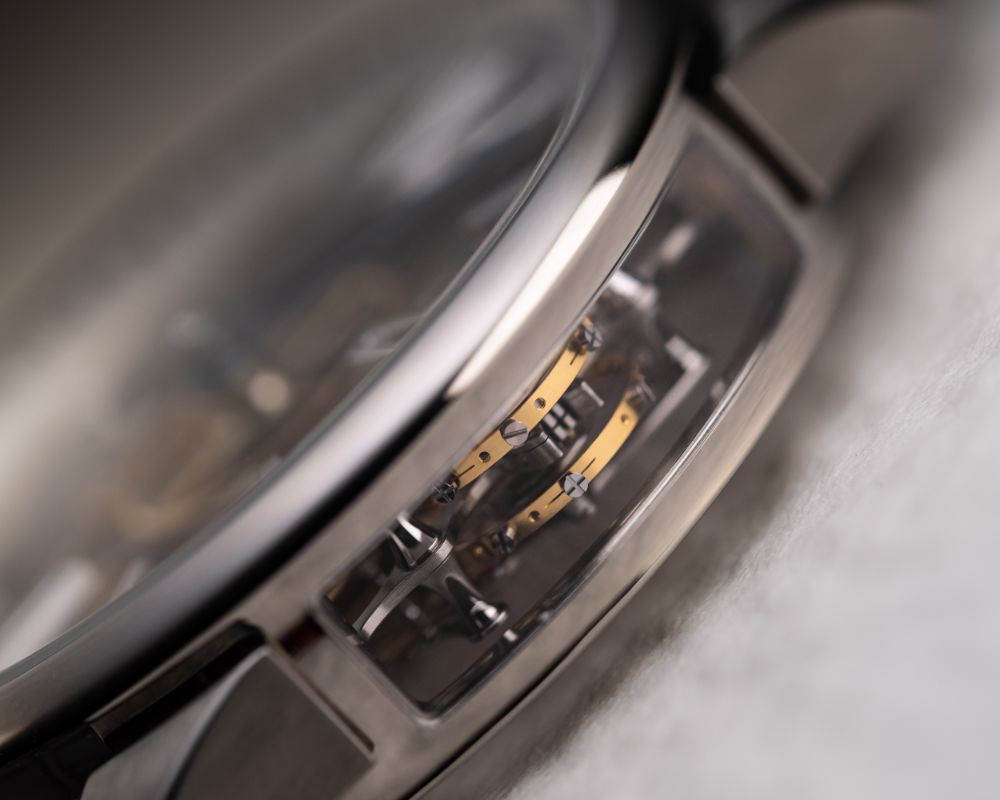 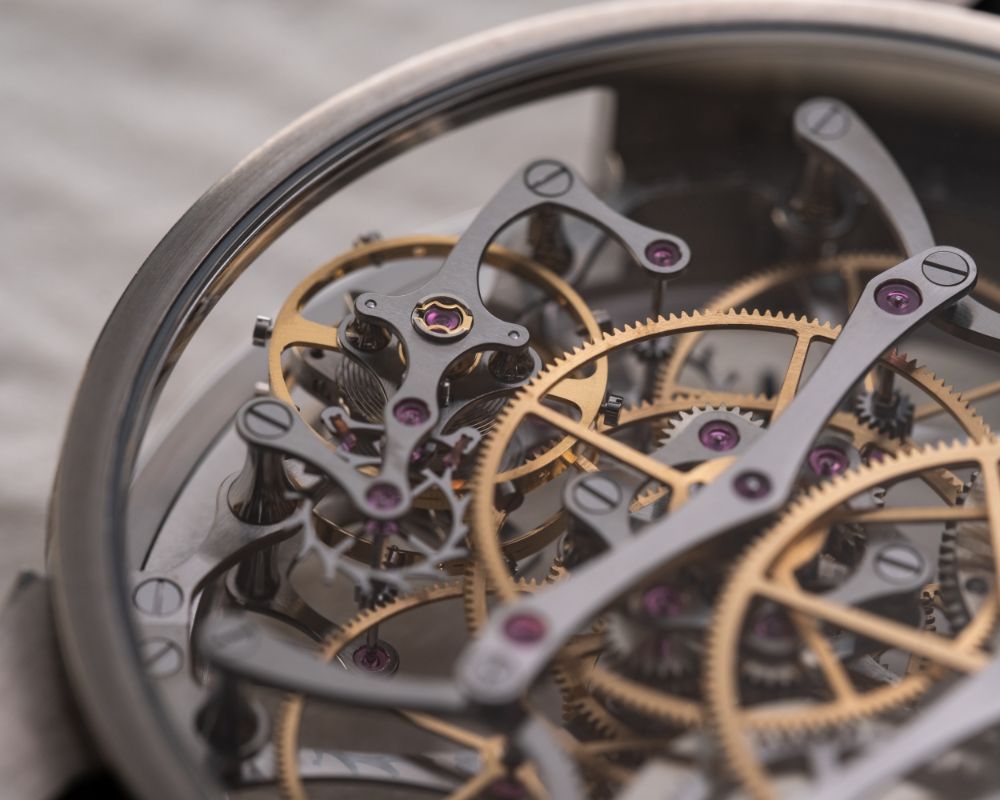 The function itself is quite classical, with the terminal part being inspired by the Deep Space Resonance. One detail sets it apart from all other calibers: it has no mainplate. To materialize the notion of isotropy (equal behavior in all directions), Vianney designed the caliber to be made only with bridges and pillars. No mainplate means no reference direction. Axles and wheels levitate in the dragonfly-wing like structure, as one would float in space. The movement can be assembled or disassembled by blocks, in no particular order, as if it was (and could be) built in space.

To better highlight the fundamental principles of the physical resonance phenomenon, all superfluous material has been trimmed down. Technical needs according to the function were evaluated so that each component is as thin and light as possible. The resulting structure is rigid and sturdy, even without a supporting plate. 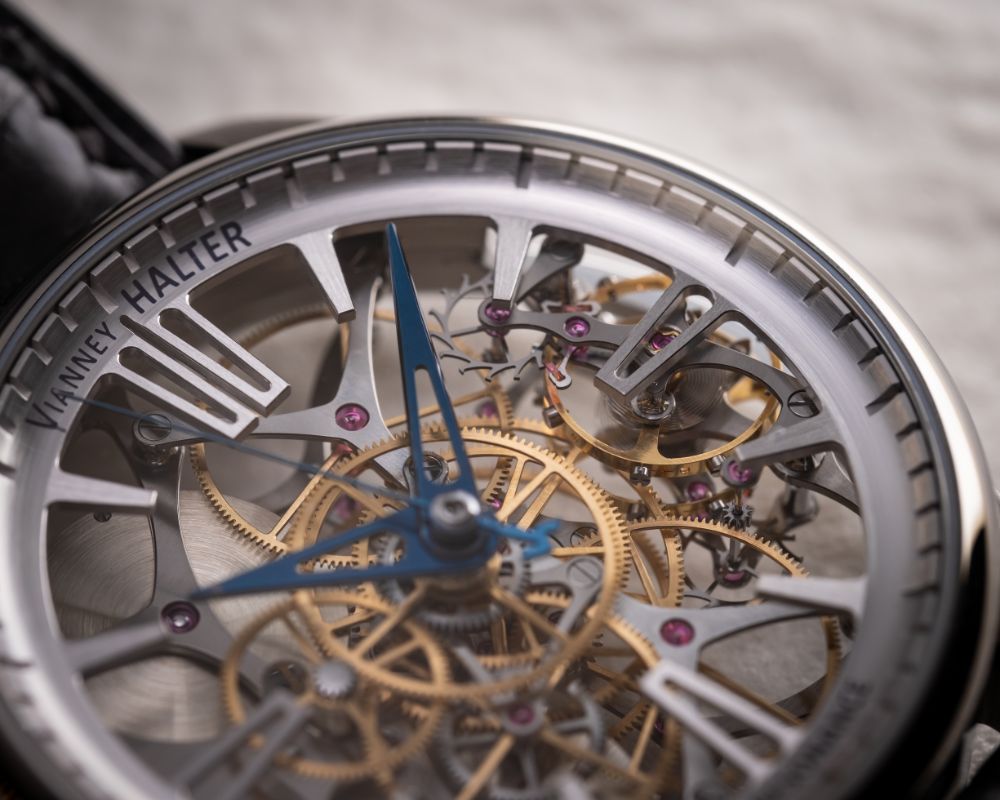 The power is provided by two barrels that feed into a differential in the center of the watch. Being the chef d’orchestre for the driving power, the design and execution of the 55 parts inside this device are critical in the coupling function. It splits the power accordingly so that the two balances receive the correct amount of energy for synchronization.

Vianney is fascinated by gears, so the wheels had to be fantastically large. Their number, uniqueness and motion all create a poetic ballet, always changing yet intemporal. For aesthetical and mechanical reasons, the diameters and thinness have been pushed to the limits despite the difficult machining and decoration. The bigger the wheels, the bigger the teeth counts are, and the smoother the power transmission. By individually contributing to even out perturbations, every element contributes to the resonance. Following the flow of force, from the barrels at 9h concentrating to the differential in the center, split into the seconds wheels at 1h and 5h, and refocusing in the resonating stack at 3h, one can see the density of components decreases for a better view of the two coupled balances.

As in the Deep Space Resonance, coupling is obtained via acoustic wave transmission through a solid unit like in a tuning fork. Having an acoustic coupling mechanism implies that the balances have to be as close as possible to each other, linked via the smallest possible bridge. This allows the energy to equalize and flow between the two oscillators. In order not to favor one oscillator over the other, the construction requires to be as symmetrical as possible.

The resonance function keeps going as long as there is enough energy. There are two resonance modes: either in phase (the two springs are expanded together) or in phase opposition (one spiral is fully expanded while the other is fully contracted). Which modes the watch locks in depends on the position of the escapements when the power crosses the resonance threshold, and is reset when the watch stops. This way, the balances behavior can change and allow for another appreciation of the resonance phenomenon through the 3h window.

The stacked coupled balances are mounted in a porte-escapement unit, allowing for a thorough regulation and an easier maintenance. The common stud holder through which the mutual perturbations and energy flow between the balances has been heavily studied and patented. The differential splits the power equally to feed each escapement. Thanks to that, the meticulous selection of paired escapements, and their tight regulation, the two oscillators are primed for acoustic resonance.

The caliber is geared towards one goal, there is nothing superfluous. Since the balances beat together, Vianney followed the spirit of chronometry, with the least clutter as possible in one single dial displaying hours, minutes and seconds. As in cymatics,
those hands are the materialization of the undulatory phenomenon. 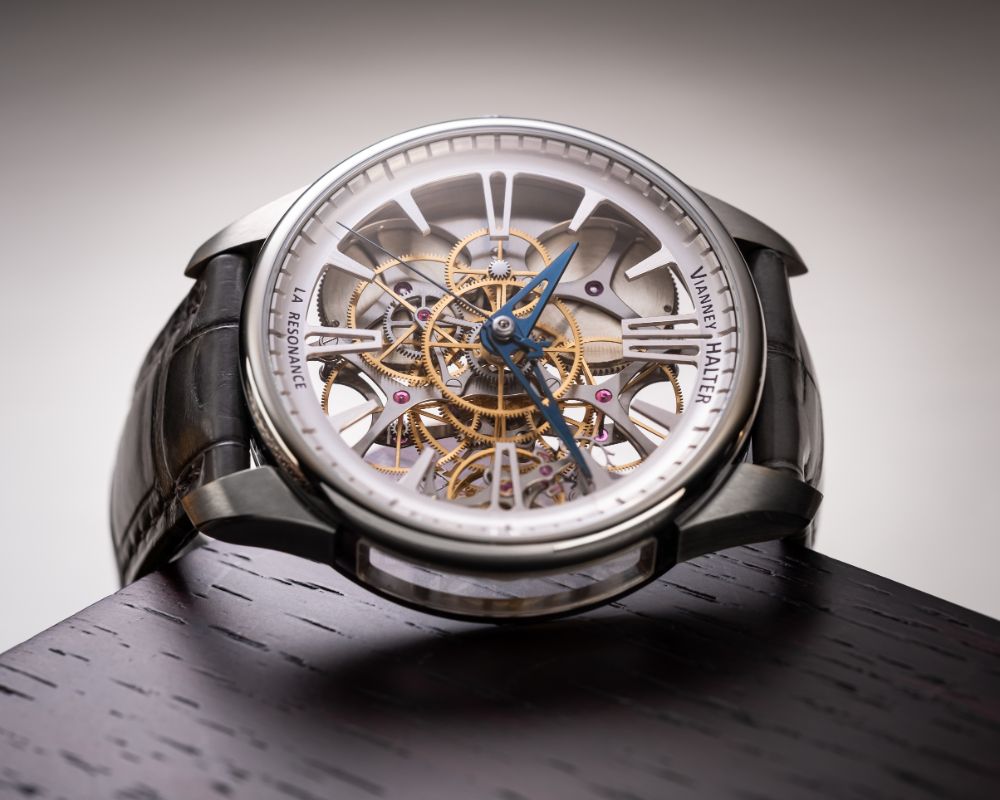 Nowadays, the first motivation when making watches is not to show the time anymore. Although this was critical in the last century, it no longer is. What motivates Vianney in the creation of new watches is to create unique and novel technical wearables. Each creation takes time and crystallizes his inspirations, knowledge and knowhow.

To Vianney, aesthetics and refinishing of mechanical and exterior components are crucial. Each and every component is embellished on all their sides, by brushing and anglage. The cumulated hand beveling length is 3.7 meters, split onto 11 wheels and 13 titanium bridges. The 30 concave pillars are mirror polished.

From the beauty of the symmetrical architecture, to the traditional hand finishing, everything converges towards highlighting the delicate nature of the complication, regardless under which angle it is observed.

The finishing of the long axles – 2 seconds axles and 2 escapement wheel axles – is pushed to the extreme. The 4 facetted axles are a hommage to the anonymous blacksmiths of old, who built entire tower clocks using only red hot metal, anvils and hammers. At that time crafting a facetted axle was the only way – there was no lathe. Modern machinery makes round axles easier to make, but Vianney’s aim is not to make easy watches. 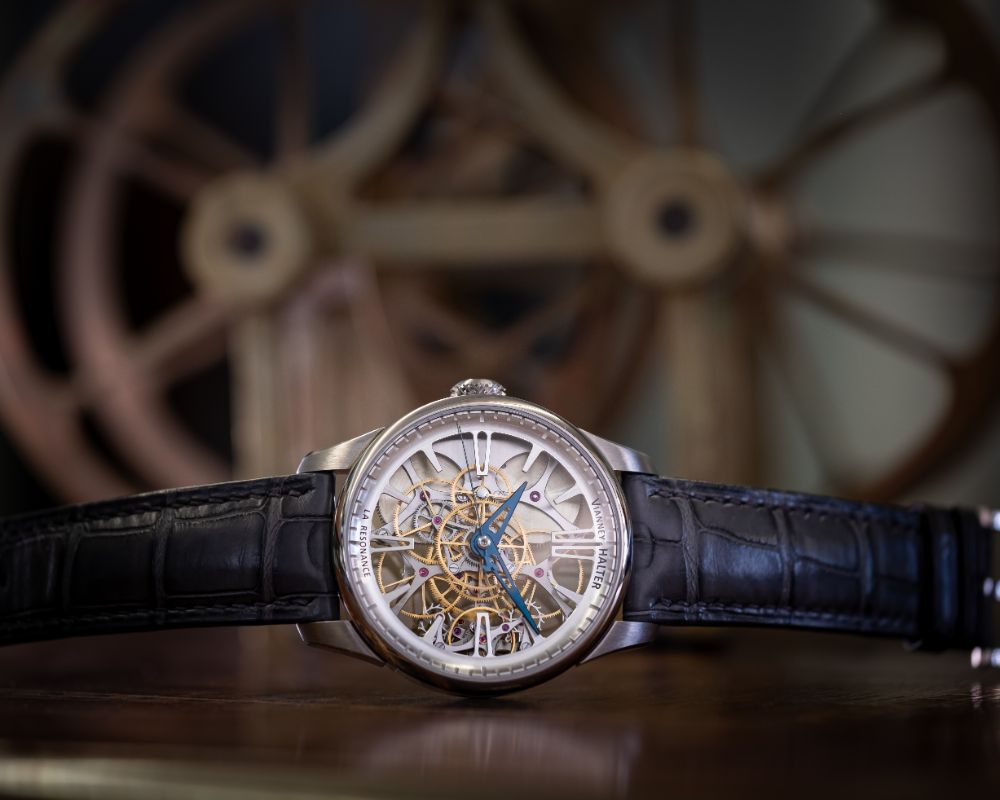 The creation of this very unique mechanical device is a process that took it’s inspiration in the past, the present and the future.

« All my creations take inspiration from the history of horology and pay tribute to our ancestors. Technicians, mechanics, watchmakers, smiths, engineers, inventors, explorers, and all of those who, in their era, took upon them to find mechanical solutions to technical challenges. They created new things and added their own sense of aesthetics. » -VH

One day Vianney heard a recording of the speech given by John F. Kennedy the 12th of september 1962. He stated that we wanted to go to the moon, not because it was easy, but because it was hard, and because this objective would be a display of energy and skills. This endeavour deeply impacted Vianney, and became a way of life in his workshop. Technical challenges and innovation always motivate and inspire him. La Resonance was made because of the difficulty in creating a suspended caliber, housing a genuine acoustic resonance phenomenon. Each piece requires a tremendous amount of work, that is why no more than 7 pieces will be made each year.

Vianney Halter is proud and happy to introduce you to his Resonance, a device he uses to share his idea of infinity of space and time, of original vibration and quantum entanglement and the fact that everything is always intertwinned. 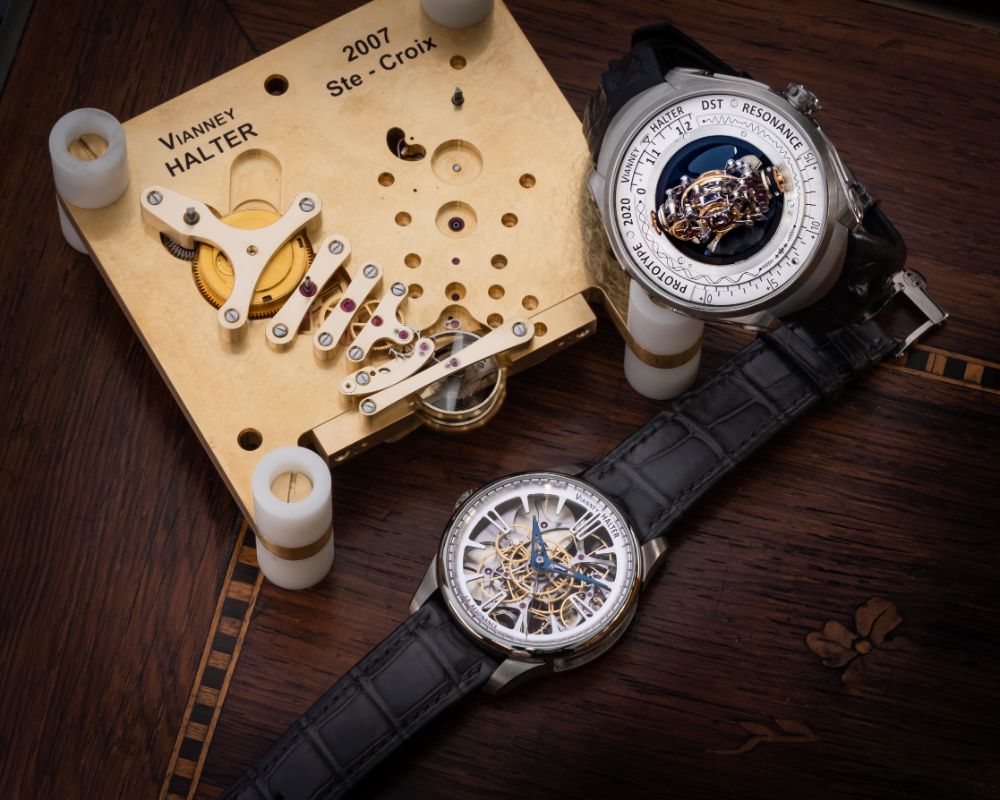