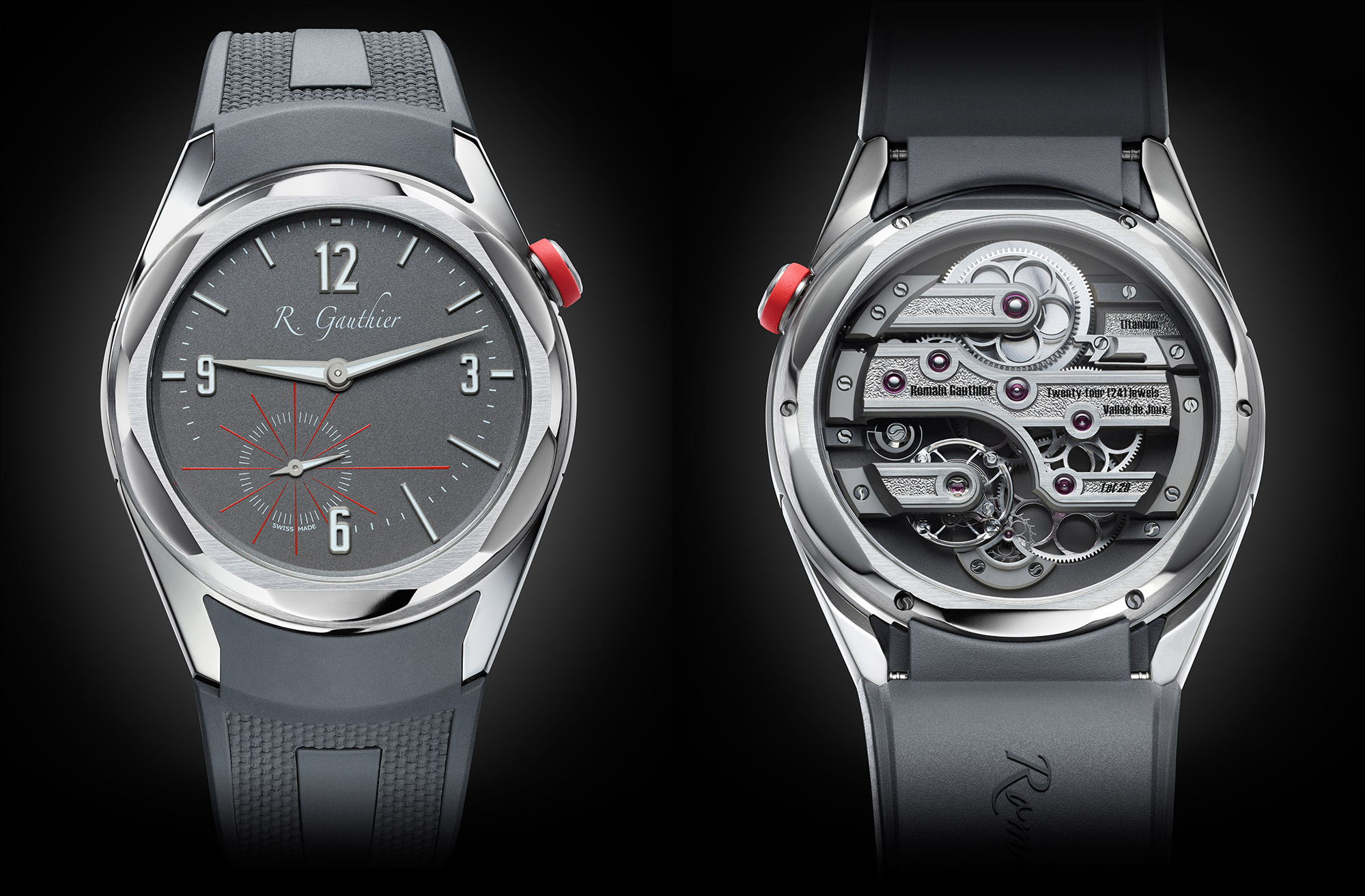 Continuum reflects Romain’s creative freedom with a modern and youthful design. This new timepiece is the result of more than 16 years of know-how acquired through the development of the brand and the Manufacture.

Technical in nature, casual in style and free in spirit, the Freedom collection has enabled the creation of this piece, which represents a true continuity in space time, a vision of the future and opens the doors to new horizons for the brand.

During its creation, it was clear to Romain that the case had to harmonize with the movement. It had to be contemporary and uncluttered. But not only that – comfort, ergonomics and the choice of materials also contributed to the design of this case made entirely of Grade 5 titanium. The dial, also of Grade 5 titanium, adds to the consistency of the piece and evokes a sense of continuity, as no circle completes the time indication.

Inspired by the finger bridges style, the design of the movement follows the watchmaking history of the Vallée de Joux, with a modern approach, reflecting Romain’s vision of the evolution of tradition.

For the launch of Continuum, Romain Gauthier presents the first edition in titanium – timeless thanks to the choice of colors and textures with subtle red highlights. Continuum, Titanium Edition One, is a 28-piece limited edition, engraved “1 of 28” on the back of each movement. 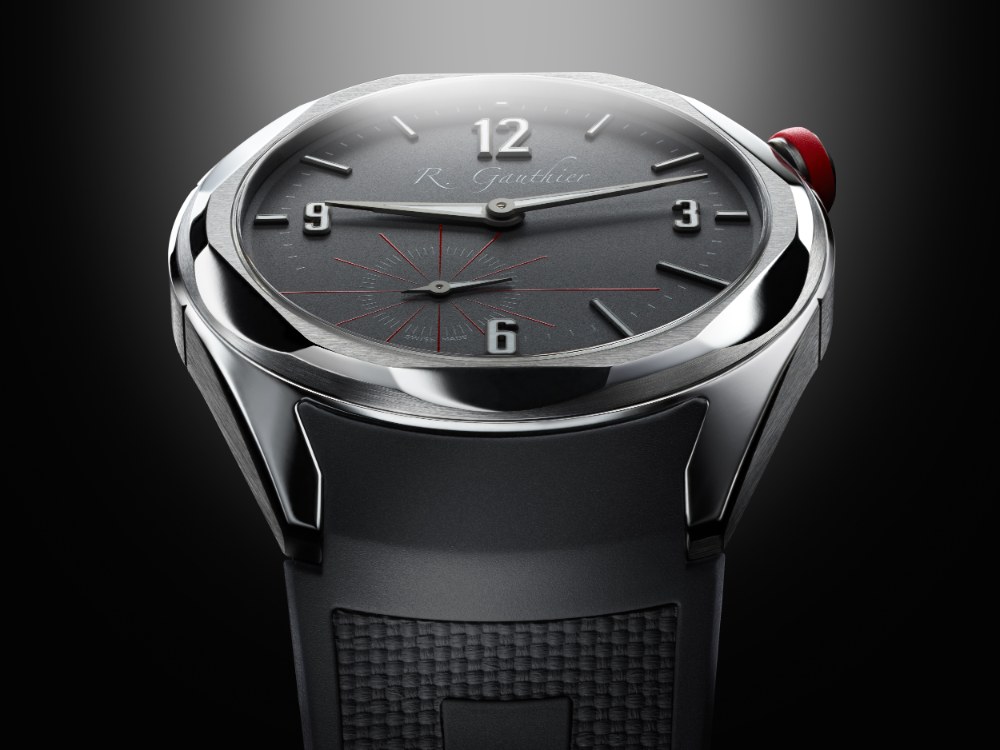 Flow and continuity to the fore on an atypical dial

As befits its name, Continuum is all about modernity and continuity, both in terms of its movement architecture and dial design. If the observer looks closely, he will see that the hour-minute hands are actually off-centred on the horizontal axis and the hour indices taper ever so slightly and are of varying lengths, while the 5-second intervals of the small seconds at 7 o’clock are also marked by tapering bright red lines of differing lengths.

Romain explains this purposeful play on perspective, saying: “Rather than a series of enclosed circles, as we often see in watchmaking, I wanted an open, airy dial on which full or part orthogonal lines form vanishing points with the axes of the hands, reinforcing the notion of continuity.”

The tapering, three-dimensional hands and index are made from 18k white gold and filled with Super-LumiNova for enhanced legibility, as are the numerals and applied hour markers, each of which has been produced from a single piece of white gold and features bevelled edges to give a punchy presence. The dial plate itself is made from natural titanium that has been sand-blasted and treated with a special coating that protects it against UV rays. 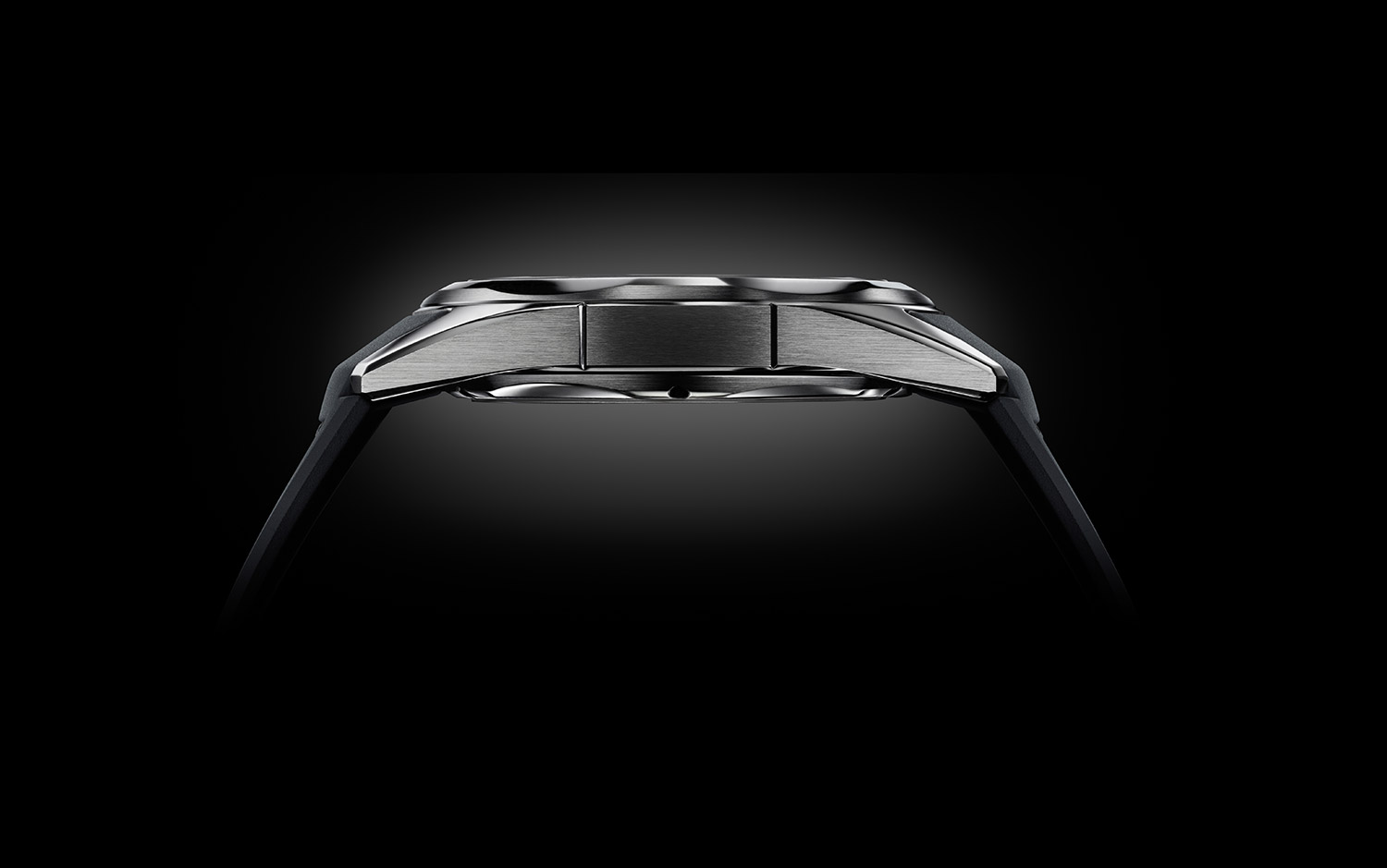 Framing the dial is a titanium bezel whose eye-catching, geometric profile is unlike anything previously seen on a Romain Gauthier timepiece. The bezel is first machined into a round shape featuring a circular bevel before six straight sides are cut into it to create 6 facets. While these facets, which have been polished, reflect the light and bring the bezel to life, the rest of the bezel absorbs light thanks to its satin-finishing. The same facetted design is replicated around the sapphire crystal on the back of the watch.

In between the bezel and caseback, the one-piece caseband and lugs are geometrically sculpted, with satin and polished finishes as well as aesthetic grooves cleverly deployed to draw out the resulting shapes. Meanwhile, the rubber strap with titanium pin buckle follows the form of the angular lugs and rounded caseband so it appears as a continuous, organic extension of the case.

And not for the first time in his work, Romain has placed the crown for winding and time-setting at 2 o’clock, freeing up space for wrist movement. A rubber ring around the crown makes it easier to manipulate, as well as adding a dash of colour to the timepiece. 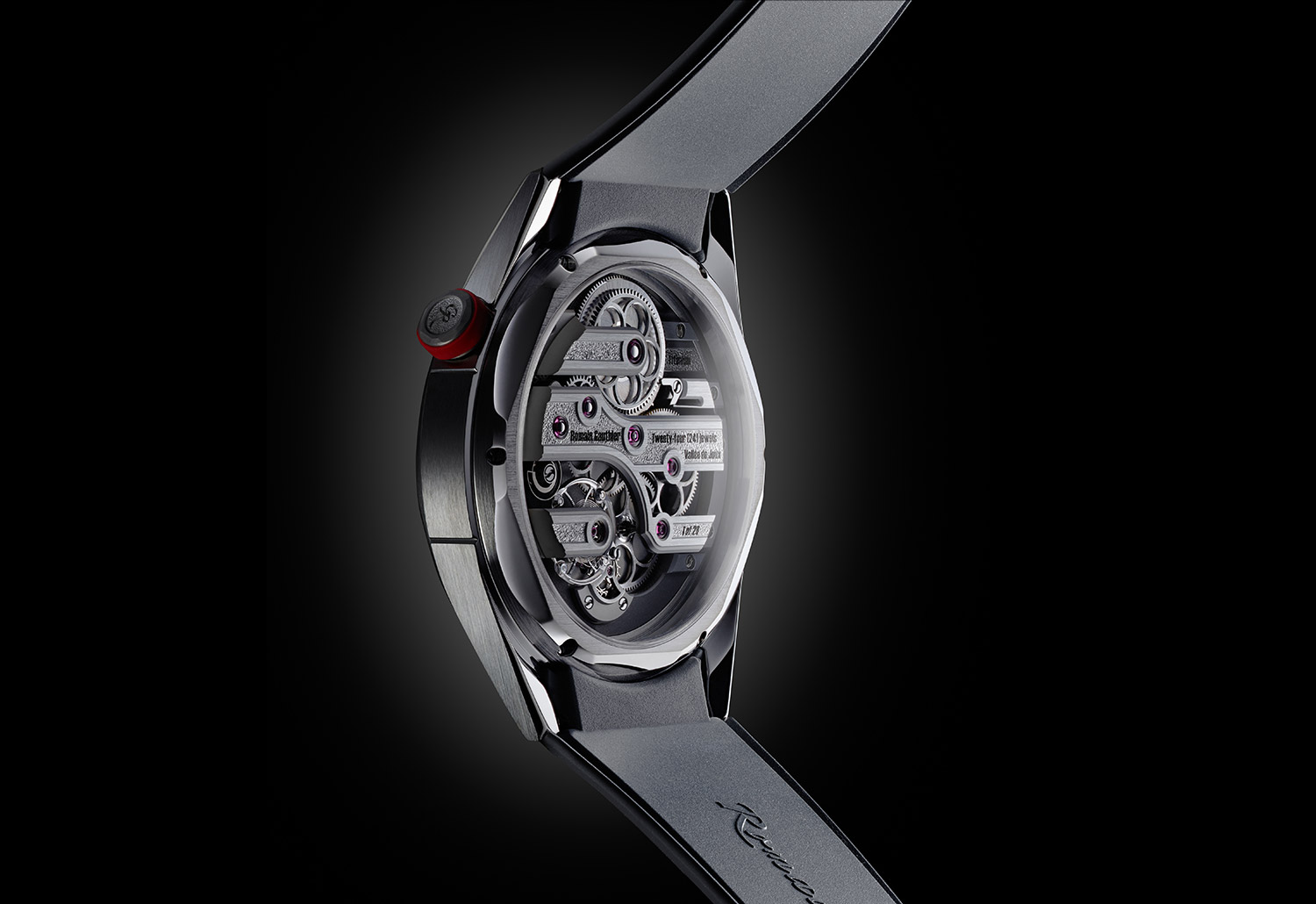 Romain has endowed Continuum with a stop-seconds – or hacking seconds – mechanism, allowing the wearer to set the time exactly according to a reference time.

Like many stop-seconds mechanisms, a brake is placed on Continuum’s balance wheel when the crown is pulled out. But instead of using a straight or L-shaped balance stop lever to halt the balance, Romain has opted to employ a snail cam that performs a double function: It touches and stops the balance wheel when the crown is pulled out and, when the crown is pushed back in, the snail cam makes a turn, with its increasingly wide form giving the balance an impulse to help it start beating again.
Those familiar with the brand will know Romain has used the snail cam’s unique shape in his past creations: It appears on the watchmaker’s acclaimed Logical One. 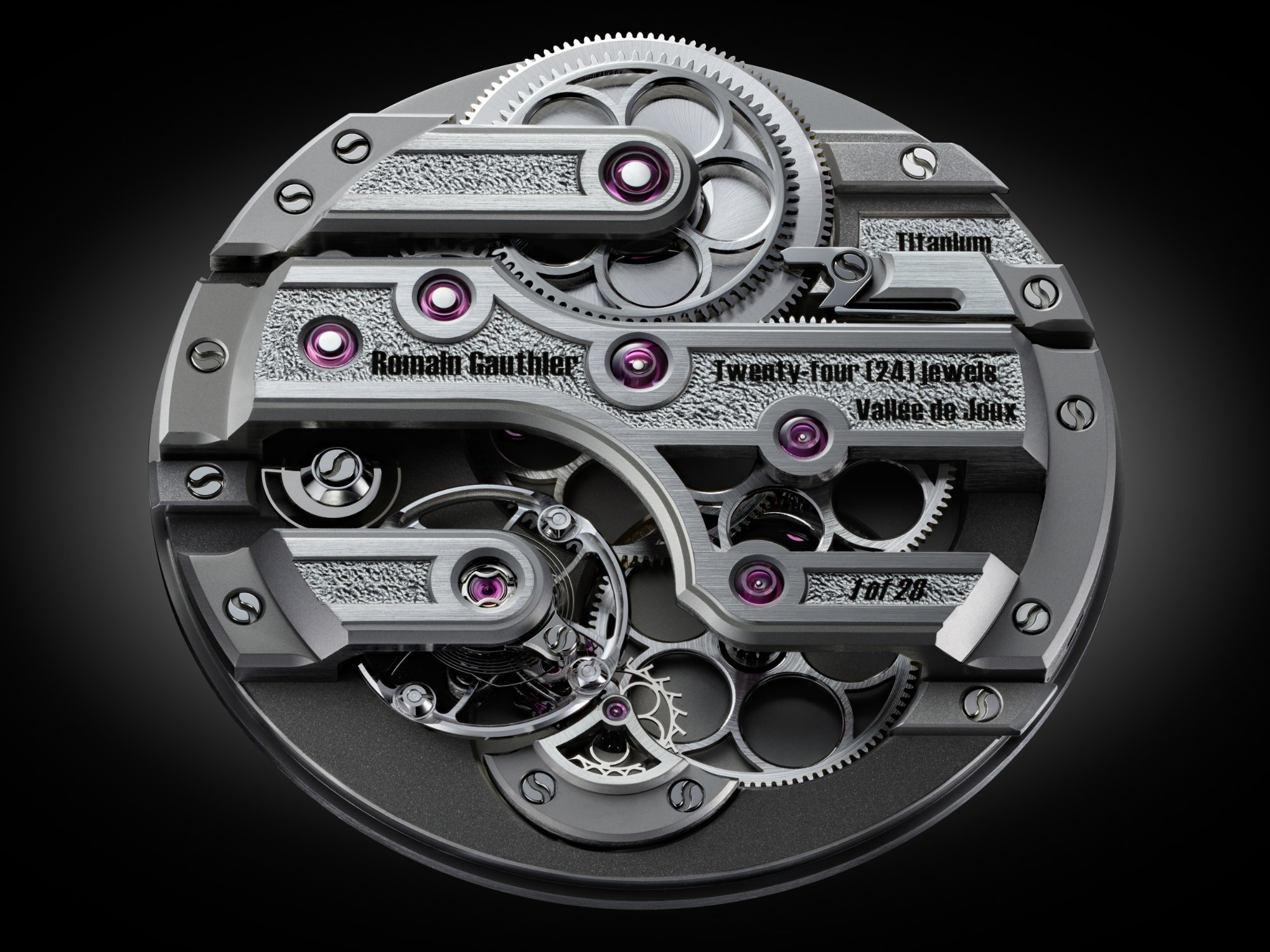 The themes of modernity and continuity carry over to the manual-winding, in-house movement, which is gloriously on show through the display back.

Taking centre stage are a number of finger bridges – historically typical of the Vallée de Joux, Romain’s birthplace – but reinterpreted here in a contemporary way. For starters, these bridges are horizontally configured and feature a ‘stepped’ shape – previously seen on some of Logical One’s bridges – that not only provides volume and depth, but also gives the sense that the bridges are literally flowing over the gears and balance wheel, with no clear end to them.

Like the case components and the dial plate, the bridges are made from lightweight, natural Grade 5 titanium and they boast contrasting tones and textures thanks to a variety of finishes. The outer edges of each bridge all feature a double bevel, while the flat bridge surfaces and rubies are each framed by a raised border that has been straight-grained. Within these borders, the hand-finishing specialists at Manufacture Romain Gauthier have used a special hand-engraving technique to create a highly original dimpled texture. The movement mainplate beneath has been hand-frosted.

The impressive decoration doesn’t stop with the bridges and mainplate: Romain’s trademark gears and ratchet wheel featuring circular, bevelled spokes have been circular-grained, while the click, snail cam and screws with S-slot heads – another signature of Romain – have been highly polished. Finally, the lid of the mainspring barrel has been embellished with a superb snailing decoration. 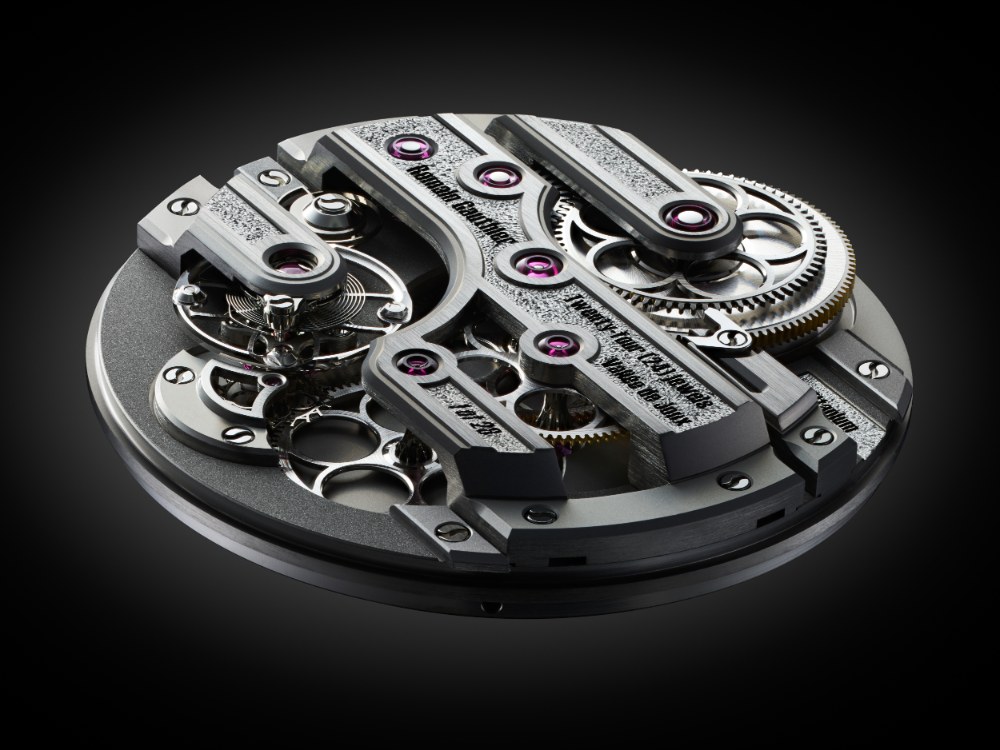 Total weight of the watch